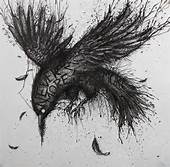 “Deep into that darkness peering, long I stood there, wondering, fearing, doubting, dreaming dreams no mortal ever dared to dream before.”

Those lines from Poe’s The Raven really creeped me out when first I read them oh so many years ago. Since then I have stood on many an abyss peering into the darkness where my dreams were of those that “no mortal ever dared to dream before”.

In that epic poem the narrator expected to find someone on the other side of the door, but instead found nothing. Now he’s beginning to get really paranoid. The possibility of a supernatural presence creeps into his mind.

That sense of supernatural presence has often haunted me in my dreams, sometimes jumping out at me or crawling up my spine and engulfing my mouth so I couldn’t scream their name.

It took me years to learn who they were and what it was they wanted of me, but they’re there, hidden, squatting in the dark corners of the cellars of my mind waiting for me to pass their way again.

Poe wanted to handle his demons by not entertaining them, by not reinforcing their taunts:

“There are moments when, even to the sober eye of Reason, the world of our sad Humanity may assume the semblance of a Hell… Alas! The grim legion of sepulchral terrors cannot be regarded as altogether fanciful… they must sleep, or they will devour us–they must be suffered to slumber, or we perish.”

–Poe in The Premature Burial

But through countless confrontations I have learned that our own demons are nourished by the fears that cause us to “suffer their slumber” it is our very resistance to them that feeds them. With each year they grow ever bigger when we lock them away and will gain strength to break through the bonds and locked cages we’ve assigned them to. They pounce before us ready and wanting to be seen, or if not, to devour. Hiding from them is futile. Calling them by name and inviting them into the upper floors of our consciousness is the only way to deal with them effectively.

Alas Poe was not able to do this and ended his life haunted, hopelessly alcoholic, maddened, and in great distress having failed in business and losing everything that he had loved.

On the pallid bust of Pallas just above my chamber door;

And his eyes have all the seeming of a demon’s that is dreaming,

And the lamp-light o’er him streaming throws his shadow on the floor;

Shall be lifted – nevermore!”

Poe gave into his demons by not negotiating with them. If he had only discerned the meaning of the raven sitting upon the bust of Pallas, the Greek goddess of wisdom, he might have opened to the deeper definition of his night shadows. Had he known that the nightmarish Raven was symbolic of his own self-betrayal, but also a symbol of death, of letting go of his self-haunting he might have been able to rid himself of its terror.

Like all dreams Nightmares come in the service of the health and well being of the dreamer. For me the Raven’s entreaty of “Nevermore” relates to never more ignoring the dark denizens of my repressed shadows.