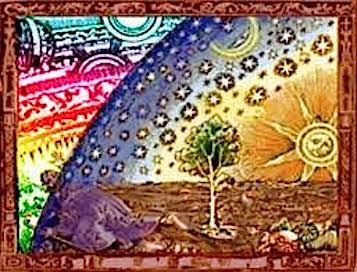 It’s a thin veil between the conscious and unconscious mind and though it may reveal our very salvation we fear to tread its ancient paths.

In the book The Archipelago of Dreams, the world that Robert passes into is the Otherworld of the Psyche, the mind, the unconscious depths he has avoided all his life. Shadows lurk there, dark and barely seen, never having seen the light of day. These shadows are not just the stuff from which Robert’s nightmares grow, but are the primordial ooze from which all our nightmares crawl.

It’s a thin veil between the conscious and unconscious mind that Robert pushed aside as he crossed a darkened lake and entered the mysterious and confusing world of the unconscious. It is this world that seems so personal but turns out to be a collective shared by us all.

There are images within the unconscious netherworld that we all share, though they may be expressed differently by culture. They are the same archetypal boogeymen – devils, the walking dead, life-sucking vampires, possession by ghouls, or evil spirits. All are the resident shadows that lurk within the deepest recesses of our minds, part of us and yet we deny them. And in their denial they become more fearsome.

Our shadows will not be denied. They will project themselves into everything and everywhere, demanding to be recognized. Greed, ill will, pride, all of the cardinal sins are but reflections of our shadow selves. But it is fear that commands the greatest attention and it is our fears that our greatest nightmares are trying to overcome and come to terms with.

Many of our movies, especially those scary-violent ones that threaten to possess us, are dealing with the myriad manifestations of fear e.g. the fear of loss – loss of life, love, respect, self-control, personal power, or soul.

We project onto our movies these fears and how we want to conquer them. Movies like The Exorcist on Warner Bros, Insidious – The Movie, and The Body Snatchers are examples of possession themes – the loss of personal control, the fear of helplessness. Zombies can represent the fear of being consumed by fear itself. This was the case for Jaws as well. Freddy Kruger, Jack the Ripper, Jekyll and Hyde and others represent the animal in each of us that we fear we won’t be able to control.

In The Archipelago, Robert is confronted with many of his fears, some of which are projections from his own unconscious mind, and struggles to understand and master them. For if he doesn’t, it is more than just his life he could lose.

What is it that goes bump in the night when it is only you and your nightmares in the room?