A reader recently commented on a posting from The Dark Knight of the Soul Blog. He noted that the reduction prayer I had used at the end of the post looked very much like a 13th century magical incantation from the Liber Medicinalis (Book of Medicine).

BE STILL AND KNOW THAT I AM GOD

BE STILL AND KNOW THAT I

BE STILL AND KNOW THAT

BE STILL AND KNOW

From the posting on Real Magic

Accident? Coincidence? Not really, both the incantation and the reduction prayer act pretty much like mandalas in that they focus the mind inward towards its center. It is in this center that the wisdom of our soul lays. It is from this place that magic can happen. 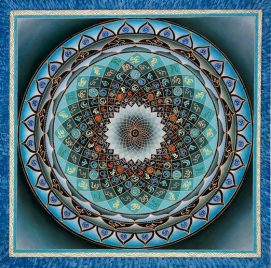 These incantations, prayers and meditative practices tend to focus on the centers of our being while removing the outward directed conscious mind that is restricted in its perception of reality and opens a door to a whole new way of being and perceiving.

This is just part of what it means to wield magic. The following is an excerpt from the Dreaming Wizard website:

So what have we discovered so far about magic that might allow us to practice being in it and thus allow for a different creation within our lives?

1) Magic is all around us; we are already in it.

3) Magic is a way of living and not separate from everyday experience.

4) The consciousness can open to Magic when the soul is allowed to express freely.

5) We have access to magic when we don’t place limits upon our expression.

7) Maintain authority over your expectations/standards by remaining at choice with your behaviors and self-expression. Be what you are, not what someone else wants you to be.

8) Magic becomes available when one dissolves the separation between ones opposite aspects and recombines them into a more functional whole e.g. dissolve the internal gender differences. Aspects of the assertive, decisive, thoughtful, creative, compassionate, emotional and intuitive can exist side by side within all of us.

10) Quiet the mind. Stop thinking things to death. Magic cannot come from the “thinking” mind. Live at least some of your life in the incomprehensible.

11) Magic does not come from the rational.

12) Magic grows from the secret orderliness of chaos. Allow yourself to be confused. Thinking that you know something about what is real can be very limiting to living what is real.

“It [magic] opens spaces that have no doors and leads

out into the open where there is no exit.”